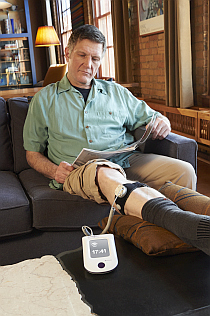 1 to 10 percent of all bone fractures doesn’t heal well. For patients, this results in complications or surgery. In some cases, surgery can be avoided by using ultrasonic waves. Orthopaedic surgeon at Spaarne Gasthuis dr. Peter Nolte and Head of Trauma Surgery at VUmc dr. Frank Bloemers explain.

When can a fracture be defined as non-healing?

Bloemers: “After 7 to 9 months. Normally, every broken bone will recover, that’s the body’s tendency. Bones have a special structure in which the healing process always continues. But sometimes it fails. About 1 to 2 percent of the fractures are non-union; in about 10 percent union is delayed. Causes can be patient related, such as smoking or corticosteroid treatment. Sometimes, a fracture needs more stability than plaster casts or orthopaedic plates and screws can give. The body thinks it has done enough and stops the healing process. This is called pseudo arthrosis.”

What are the treatment options for non-union fractures?

Bloemers: “A standard procedure is surgery, during which the fracture is cleaned and bone graft from the pelvis for instance, is placed at the non-union site. Also, we can use bone morphogenetic proteins that stimulate bone formation. There are 15 known proteins for that purpose, and we can fabricate BMP 2 and 7. But it’s expensive and doesn’t work for every patient. The only method that doesn’t involve surgery is a treatment with ultrasonic waves.”

What does the Low Intensity Pulsed Ultrasound (LIPUS) treatment consist of?

Bloemers: “The technique backs up bone healing. Pulsing low-intensity ultrasounds stimulate the healing process of the body. It recovers or accelerates the healing process for delayed or non-union fractures. This treatment can be used for all kinds of fractures, also fresh ones. A daily 20 minute treatment – at home with a special device – can sometimes prevent surgery.”

Bloemers: “No, it has been available for 20 years.”

What effect do ultrasounds have exactly on non-union fractures?

Bloemers: “First, we assumed imperceptible shocks stimulate the bone to heal: like the effect a lithotripter has. Now we know that the ultrasounds work on the level of cells and tissue in the bone healing mechanism: it affects proteins and enzymes and reboots the stalled process. Mighty interesting. For some patients it works, and for others it doesn’t. The treatment doesn’t replace badly conducted surgery or instable fractures. Neither does it work for wear and tear, such as osteoarthritis.”

Dr. Nolte, you conducted a study on LIPUS. What were your findings?

Nolte: “My 2002 dissertation discussed the ultrasound treatment for non-union fractures. On cell level, ultrasounds stimulate bone formation. On tissue level, we clinically proved it accelerates calcification. The treatment and its effect on cell and tissue levels is still being researched, in The Netherlands as well as abroad. The studies prove that the technique can be successful with delayed bone union: after treatment with ultrasounds, bones heal in 80 percent of the cases. The difficulty is that there are no control groups. What would have happened to patients who didn’t get LIPUS? We know that 30 to 50 percent of non-union fractures heals spontaneously. But still, that means it offers at least 30 percent more recoveries.”

In what cases do you use LIPUS?

Bloemers: “In VUmc, we use LIPUS for patients with multiple and complex bone fractures that needed multiple surgeries. If during rehabilitation recovery fails to appear, we must operate again and no one wants that. If the X-ray shows the bone isn’t healing adequately, we start the ultrasounds treatment. Also, we use it with professional athletes; we have good relations with Ajax. Ultrasounds accelerate recovery of the collarbone and phalanges. That can make a huge difference for important matches.”

Who benefits from the treatment?

Bloemers: “Basically all patients, also elderly and people who smoke, studies tell. That’s great for patients, but unfortunately it doesn’t work for everyone, otherwise this would be the standard procedure. In England, the treatment has been included in the NICE guidelines for long bone fractures such as the shinbone. It says that after 9 months, healthcare teams may want to use an ultrasound bone healing system called EXOGEN.”

It doesn’t work for every patient?

Bloemers: “No. Dr. Peter Nolte did a systematic review with data from several randomised controlled trials that show it works for a large group of patients. That is an interesting finding that calls for further research. In our academic hospital, together with the division of endocrinology, we study fracture-healing problems on DNA level. A lot is still unknown in this field.”

Why does it work for one person, and not for another?

Nolte: “There is no clear answer to that question. Neither is there for the question why some fractures don’t heal. It may involve the fracture site, the way it broke, illness of the patient, smoking or medication. That’s why healthcare personnel should judge each individual patient separately. A guideline would help them to do that.”

In The Netherlands, the treatment is used less often than abroad. Why?

Nolte: “Previously, health insurance funded the treatment. Now, hospitals have to finance it themselves. It means they have to make hard decisions in different types of medication and treatments. Being critical is a good thing, after all, this treatment costs money. But surgery is more expensive. In the Spaarne Gasthuis we have chosen to use this therapy, but on a small scale.”

Which developments do you foresee for the future?

Nolte: “Together with dr. Frank Bloemers, we composed a survey to explore the need for a protocol for non-union bone fractures. Doctors would be able to apply such guidelines to every individual patient, and see if the treatment would fit them. I think a protocol would be a good addition; for some patients the treatment really is a solution.”